“The scientists of today think deeply instead of clearly. One must be sane to think clearly, but one can think deeply and be quite insane.”
-Nikola Tesla

In school, you might have learned of the importance of conservation. Brush your teeth, turn the water off. Instead of a bath, consider a shower. And for goodness sakes, NEVER water your lawn on the hottest days in July!

I can’t speak for other cultures, but if you’re an American, you might even get an uneasy feeling whenever you see a sprinkler running full blast in the hottest part of the day. But what if I told you that conservation campaign was actually a lie which had been converting hoarding by the few into deserts for the many? Would you believe me? Hollywood has for years planted the seed of this fallacy in your head…

In knowing the truth, I still catch myself from time to time feeling a little uneasy when I turn that spigot on during the hottest part of the day. But overcoming dogma, otherwise known as indoctrination, and deprogramming yourself on the subject was never supposed to be easy. After all, there are powerful forces at work with a vested interest in YOU believing THEIR lies! 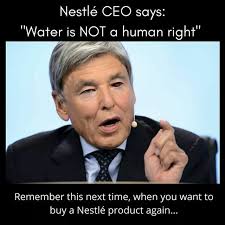 Well, believe it or not (the reader is ALWAYS encouraged to do their own thought experiments on the subject), there is causality between humans (or any water features) watering the sky, and the sky watering the earth! And, as we can now observe, there is also causality between humans NOT watering the sky, and the sky not watering the earth. You see, we really are the stewards of this planet - except of course we had previously been instructed to behave in ways very much contrary to the best interests of this beautiful planet we all share!

“If you want to find the secrets of the universe, think in terms of energy, frequency and vibration.”
-Nikola Tesla

When you draw water from the negatively charged earth and irrigate via above-ground means such as a sprinkler, both the energy and water vapor which had been trapped in the aquifer has a better path to reaching equilibrium energy states with the water vapor that is trapped in the clouds (or in helping to form new clouds). This effect is most pronounced on a hot summer day when you begin to above-ground irrigate using the aquifer. If you and your neighbors have enough water pumping through your irrigation, you can actually make it rain! And that is a good thing for the earth

. What would happen if you added even more negative ( - ) charge to the water as you irrigated? That would be an interesting experiment in influencing the direction and seeding of the clouds…


Furthermore and perhaps more significantly, clouds are basically just water vapor suspended in air. When enough water vapor condenses inside of a given cloud, it becomes laden with that water, becomes dark in appearance, and eventually it rains. Precipitation is a good thing! When we irrigate, we are helping to seed the clouds with more water vapor. The more water vapor which is in the air, the more often it rains. A simple example of this is on the coast, where it rains ALL THE TIME! So water more, and it rains more. Water less, and it will rain less. Want to make the desert bloom? Dig a well, draw up the water, and irrigate. What happens when you irrigate the desert?

When you irrigate the desert, it blooms! And when the desert begins to bloom, it develops its own vegetation. What did you learn in school about vegetation? As a reminder, vegetation helps the soil and air to retain moisture. With enough vegetation, you can even control the weather - to make it rain. A good example of this is the rainforest. When the rainforest of South America is healthy, it rains often. That’s why they call it “the rainforest.” But as you have also learned in school, when they start to cut down the rainforest it begins to turn into the desert. It is the story of watering vegetation, in reverse. So you see? MORE WATER builds up vegetation (preferably tress which shield from the sun, or growing food which serves a purpose over silly grass), the relative humidity in the air goes up, the clouds appear more often providing even more cloud cover from the sun’s rays, and before you know it the local ecosystem has a cooling effect on the planet instead of a heating effect as is seen in the desert. Magic? Science! But not that science you might be regurgitating from a textbook in your head at this moment to refute - the science of the thought experiment turning dogmatic science right on its head - Again, YOU, the reader, are the authority! Not some old dusty textbook!

Picture something with me. Imagine instead of conserving all that water like “good citizens,” we began all together watering every day - ESPECIALLY on hot days. Yes or no - would it rain more often? Yes or no - would the nearby ecosystem find itself to be more cool? Yes or no - is rain and cool weather a good thing for offsetting global warming? Yes or no - does having rain clouds more often provide more shade from the sun?

And what about Kentucky Bluegrass (lawns)? Well, it doesn’t serve much of a purpose so they seem pretty silly, but it’s still better than letting the earth turn to desert! The jury is still out thanks to the ever-changing results of the scientific method, but I say water retained is water earned! Better to have grass then a dustbowl, and better to have trees and/or crop land / husbandry than grass, all else equal.

Last caveat - chemicals! Chemicals are bad, mmmmk? Do not put ANY CHEMICALS or other toxins into our water cycles! Simple.

The mission of WeCharg is to make the desert bloom. We envision a future where decentralized energy-as-money (https://chgcoin.org) empowers economic growth in remote areas, which permits human activity in remote places, which promotes the irrigation of the sky and topsoil, which helps to improve climates and economic activity. We envision a future where the poorest and most remote of places are an oasis in the desert. We do this via WeCharg stations, which power electric cars and SOON - provide hydrogen cars with fuel.

What’s so great about hydrogen? Well, when you burn hydrogen, you get WATER. We at WeCharg think that’s pretty smart! Part 2 of this article will discuss the big plans which https://chgcoin.org and https://WeCharg.com have to make the desert bloom, with hydrogen!

If you remember this article and SHARE IT WITH OTHERS, we can make the desert bloom!

Here’s a nice visual of the mission of WeCharg and CHG Coin (ends at 1:15:50, do not proceed beyond that timestamp kids!):